There may be delays in the shipment of orders due to labor shortages, government restrictions, and other concerns related to COVID 19 Thank you for your business and patience as we work through these issues 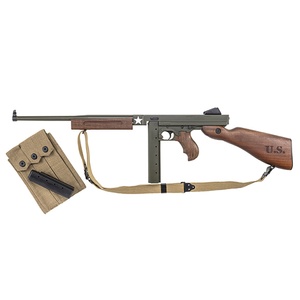 Built like a tank is a phrase that has entered the American lexicon as a means to describe hardware that is durable strong and nearly indestructible. The term may have originated in describing armored fighting vehicles but it also clearly describes the Tommy Gun. It is only fitting then that Auto-Ordnance continue the series of WWII commemorative guns with the Tanker Thompson dedicated to the memory of the brave American soldiers who faced the enemy in steel chariots like the M4 Sherman Tank. Nearly 50000 Shermans were produced during World War II seeing action primarily in Europe against Nazi Germany. Just like the Thompson these Shermans were a vital part of the war effort. The crews that took them into harms way were often outgunned by German tanks but nevertheless took the fight to the enemy and achieved victory despite the odds. Auto-Ordnance is proud to honor Americas armored warriors with this commemorative Thompson. Each Tanker Thompson is Cerakoted in Army O.D. Green. The white star of the Sherman Tank is engraved just in front of the magwell. The U.S logo is engraved on the buttstock. Like every Thompson the gun is all steel with high grade walnut furniture. The 16.5 barrel is exceptionally accurate. Owning the Tanker Thompson gives the modern shooter the opportunity to own a piece of history while honoring the memory of the brave tank crews who delivered on Americas promise to achieve final victory in World War II. - Caliber: .45 ACP - Barrel: 16.5 Smooth - Finish: Army O.D. Green Cerakote - Material: Steel - Length: 38 overall - Weight: 11.5 lbs. - Sights: Blade front fixed battle rear - Magazines: 30 round stick and 20 round stick - Stock: Walnut fixed stock and horizontal foregrip - Warranty: 1 Year